Baby University helps parents give their children the greatest gift of all: A parent who can meet their needs and knows how to be their biggest cheerleader.

In fact, The Telegraph reports3 that this "study of 10,000 teenagers has found the home environment is three times more important than the school, when it comes to 18-year-olds' test results."

"I make more family time for my kids now."

In a study that targeted parents whose children were about to enter school, they found that improving either parenting practices or the marital relationship had a significant effect one, two and then four years later on children's behavior and success in school. 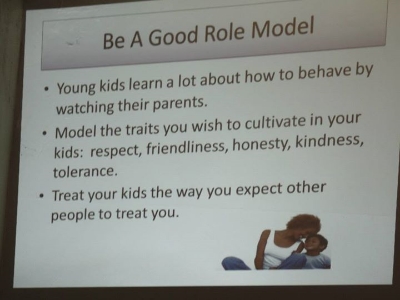 Presentation at a Baby U class.

"I learned how to understand and listen to my children."

The relationship that parents share with their children is one that impacts a child throughout his or her lifetime. Studies show that the benefits of parental involvement are manifold, affecting numerous areas of a child's life, including health and development, academic progress, and life choices.

“A vast store of research, …. has confirmed that what young children learn, how they react to the events and people around them, and what they expect from themselves and others are deeply affected by their relationships with parents, the behavior of parents, and the environment of the homes in which they live.”4

“What gives the parent a special place in the young child's life? What does the close emotional relationship with the parent provide that other adults cannot replicate?

“To answer such questions, researchers have focused on the development of security, confidence, and trust between infants and toddlers and their parents. This central feature of early relationships is captured by the concept of “attachment security.”

“In the rare situations in which infants do not have the opportunity to form an attachment with even one trusted adult, their development can deteriorate rapidly and dramatically.

“The remarkable recovery that these infants display once they receive stable care and loving attention further reveals the importance of the child's earliest intimate relationships.”5

"No significant learning occurs without a significant relationship."
- James Comer (1995)

2 Research in Social Stratification and Mobility - "The study of social inequality is and has been one of the central preoccupations of social scientists." - Found at journals.elsevier.com.

Excerpts from an Oct 10, 2012 blog post by Education Week (blogs.edweek.org) titled Parents More Influential Than Schools in Academic Success that references the Research in Social Stratification and Mobility study mentioned above.

Parents who want their children to succeed academically in school have more influence over that outcome than the schools themselves, according to a study by researchers from three universities [North Carolina State University, Brigham Young University, and the University of California-Irvine].

To arrive at their findings, researchers used the National Education Longitudinal Study data (at nces.ed.gov) to evaluate social capital at home and at school.

To measure school social capital, which is defined as a school's ability to serve as a positive environment for learning, the researchers evaluated: